Become a Game Developer Without Coding

If you think about game industry Thousands of new games are released each year, both by major publishers and independent developers.  Maybe you also want to be a freelancer in game industry as an indie game maker or developer. Something that you need to know is not all game makers are able to code, and you can create game without doing coding. So, become a game developer without Coding and even no need to learn programming?

You can use game builders to create a game without coding. You don’t need to learn how to code to create a game like Pokemon, Zelda, Harvest Moon, Flappy Bird, first-person shooters, zombie games, and many more game types.

This is possible because the creators of these games have engineered every possible game movement. Then it’s only a matter of deciding which of the pre-programmed actions to use. But to become a game developer without coding, you must prepare :

What is the point of your game? What are the names of your characters? What is their driving force?

You’ll need to write a story about how your game’s environment works. This is valid not only for your heroes, but also for your antagonists.

What is your world like? Is it based on real-life physics? Or does it have its own set of rules? You must establish your ground rules early on and stick to them.

How many lives or health points does your hero, for example, get? What happens if the hero dies? Is it true that enemies respawn? How does your leveling device work? Is it possible for enemies to climb over walls?

After you’ve decided on a story, rules, and resources, the next step is to decide which game builder to use. The majority of them have free versions that you can check out before investing in the paid versions.

So, here are the top 3 game builders that can make you become a game developer without coding. Let’s check them out.

Yoyogames (GameMaker) is one of the most common game creators available, and it also has some of the most comprehensive features. The free version lets you make a simple game that can be published and played on your computer. The premium price is pricey

publish on iOS and Android.

Games that are made using Yoyogames are :

Constuct 3 is one of the most innovative game creators currently available. It is not cluttered, and you can easily create a game in just a few hours. Construct 2 is easier to learn and less expensive than GameMaker, at $129.99, and allows you to publish on Mac, Windows, Linux, iOS, Android, and Wii U.

The user interface of Construct 3 is stunning. It doesn’t try to suffocate you with the game builder’s minutiae. When it comes to incorporating actions and activities, it’s very intuitive. 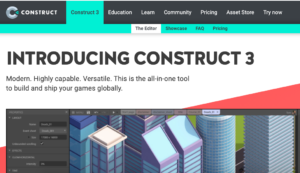 GameSalad is another game creator that allows you to create games without writing any code. GameSalad, unlike GameMaker and Construct 2, is rented rather than purchased. For just $29 a month, you can become a pro member, which is already a fantastic deal if you just want to try it out. You can only try the basic package for 15 days.

Where to Find Game Resources

Here are a few places online where you can get design assets such as game art, character design, sound files, background scenes, audio, and more if you need them.

All is done, now what?

When you have completed your game, you can market it . You can use social media Ads, like facebook Ads for that. You can also put your game on your freelance portfolio as a game maker on Flexgigzz.com so client can see your games.