Home Latest News Data Analysis In the Gig Economy, How Do You Find the Best Freelance Developers?
Latest NewsData AnalysisEconomyFreelancers

In the Gig Economy, How Do You Find the Best Freelance Developers? 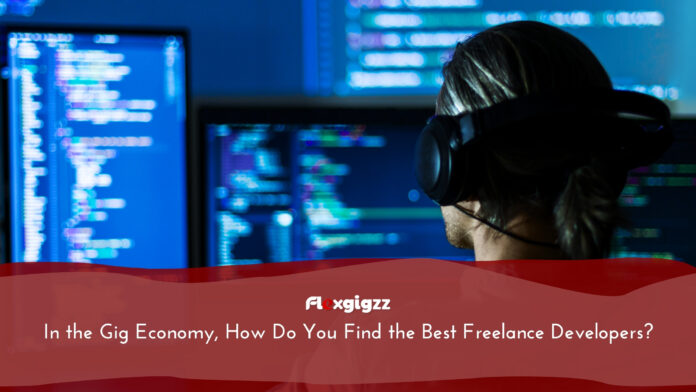 Take advantage of the most significant advancement in the future of work.

As engineering leaders, we must understand and capitalize on the gig economy, which has emerged as one of the most fundamental changes in how we work. Whether you like it or not, outsourced labor will be a part of the future of employment.

When is it appropriate to hire a freelance developer?

To begin, if you have never hired freelance developers before, you may be wondering why there is a need for them. Companies typically engage freelancers for five reasons:

– Access to a wide range of expertise across various tech stacks and specialties. For instance, iOS mobile development, eCommerce website development, and so on.

– Freelance developers are more widely available, and they can usually be found within a few weeks.

Busi- Freelance developers are less expensive. Even though their hourly fee is more significant in some circumstances, it will wind up being cheaper than hiring a permanent developer because there will be no supplementary costs such as insurance, 401K, or superannuation.

– You do not require a long-term permanent developer. Finally, a corporation may conclude that a project can be completed once and will not require ongoing maintenance or work. Alternatively, there may be a project requiring a specific talent for a particular milestone—setting a DevOps infrastructure, restructuring an existing tech stack to a new one, redesigning a web application’s UI, tiny bug fixes, and so on.

A new common explanation has emerged in the previous year. This is owing to the increased popularity of remote work:

– You have a team that is dispersed.

However, it is crucial to note that research indicates that price is at the top of the list for smaller businesses, even if they do not have a fully distributed staff.

When is it not a good idea to engage a freelance developer?

Hiring freelance developers, on the other hand, may not be the best option for the following reasons:

– Preference – prefer to work with colleagues in the same office/timezone. According to data, most freelance developers live in Eastern Europe and North America, followed by Asia and the Middle East.

– Lack of trust in skill and quality.

– Negative impact on the potential value of the company for startups trying to get funding.

When employing freelance developers, there are several crucial considerations to consider. Understanding and implementing these best practices is critical to achieving practical results through the freelancing workforce.

To be successful, engineering executives must think holistically to bring the organizational and technology parts of decision-making as close together as feasible.

Consider the value you want to gain from this person before hiring.

Short-term contracts (anything less than three months) rarely provide much value to large organizations because it takes a long time for most people to grasp the numerous technologies, vast codebases, tools, and processes utilized in large organizations.

Processes and codebases are less complex in small to medium-sized organizations, and shorter contracts work better. This is also dependent on the type of the job. For instance, whether the developer is working on a specific project or performing ad hoc, business-as-usual chores.

To get the most out of the developers, a well-defined list of tasks or projects is essential. This list will guarantee that they understand the requirements and can complete their responsibilities more efficiently. Everyone can also use it to determine whether the developer matches your needs.

Standards must be enforced.

It is not sufficient to just inform freelance developers about your organization’s coding standards and conventions. It is also critical to examine their work to ensure that the norms and rituals are followed correctly.

As a result, code review is critical, particularly for the first few projects they work on. This is necessary to guarantee that the developer adheres to your organization’s code standards.

If you’re supplying equipment for the job, such as a workstation, make sure they’re quick enough to avoid becoming a bottleneck in getting the most out of developers.

If possible – ensure that all software, IDEs, graphic software, etc., are installed on their workstation before they begin.

Consider how much time it will take to bring these developers up to speed. This is related to my first point about prioritizing value over deliverables or projects.

Is it truly worth having an existing employee or employees (developers, product managers, designers, analysts) spend a few hours every day with freelance developers to get them up to speed, and they are only with the organization for a month?

Spend money on tools and processes.

If your firm does not already have tools and processes in place to accommodate remote and async work, you must invest in them immediately.

The future of work is here to stay. Now is an excellent opportunity to implement processes and technologies such as ticket tracking, workflow management, time tracking, communication tools, etc.

It is also beneficial to have standard practices for the team so that freelance developers can study up on these resources and properly onboard (e.g., How to start a sprint, how to run a retrospective, how to triage bugs, how to manage incidents and outages, how to roll out a feature, and so on).

When there are best practices and templates to follow, freelance developers will know what is anticipated in each case and will not need to check in with you frequently.

Hire the Best People Every Time

The most excellent freelance developers for your organization are those who are a good fit, and only you, as an engineering leader, can determine which are the best.

So my suggestion is simple: always employ the proper individuals for the job by learning and implementing the best techniques I’ve discussed in this article.

While they are freelance developers and may not be with the company for long, use the same selection procedure that you do for full-time workers to examine their technical talents and their ability to work effectively with others.

Where do I look for and recruit full-stack developers?

Upwork will provide you with the most diverse pool of talent. Fiverr’s fixed-rate model isn’t suitable in these scenarios.

Toptal and similar companies with validated talent pools are a solid option for development work. However, you may discover that approaching freelancers directly through recommendations or reputation is the best solution.

What is the cost of hiring a freelance developer?

On average, freelance coders charge between $25 and $300 per hour. Developers with a good name can charge much more.

Should I hire a freelance programmer?

Will you only require the developer’s skillset for a specific milestone or for a limited time? Consider whether you can use effectively onboard a developer at their hourly rate while spending less than full-time hiring, in the comparison, including both benefits and extraneous costs. Hire a freelance developer if you can.

Flexgigzz is the Asia leading marketplace for freelancers service and together with SOHO Learning Hub which is an online platform for short courses and both of them aims to be the number one provider in Asia. For growth industries such as E-Sport Authority which is dedicated to providing independent media coverage to all E-Sport News related from around the world and for the art world, there is Atelier Auction which is an investable art auctioneer and being in the art scene for decades