Reasons Why Freelancers Needs to Put Their Mental Health First 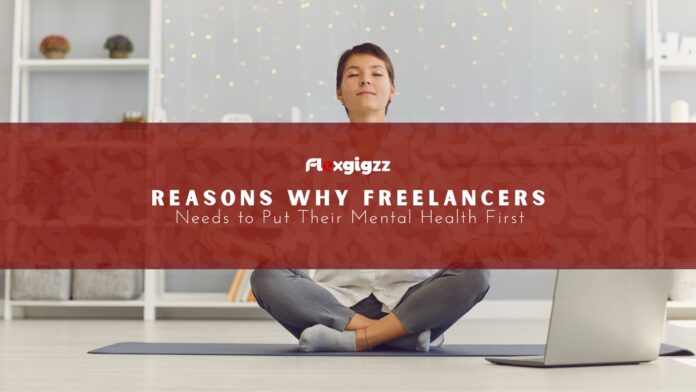 Like many self-employed individuals, I find the independence of freelancing difficult to match. As someone with mental health problems like ADHD, anxiety, and bipolar disorder, the lifestyle allows me to work around my bad days, which is the polar opposite of what I experienced while working full-time.

But, in the last year, I’ve discovered a huge disadvantage to the freelancing lifestyle: continual exhaustion. As job stress is exacerbated by pandemic fatigue, it’s more crucial than ever for freelancers to address mental health—especially if you, like me, have a history of mental illness.

It’s difficult to give yourself permission to disconnect. It can cause stress because you’re worried about missing possible tasks or the pile of work you’ll have to deal with later. However, you must downtime to compensate for the stress and mental exhaustion that come with being self-employed. Here are some professional tips for creating mental health breaks that work for you.

Even though full-time workers are susceptible to burnout, they frequently have built-in resources for assistance.

Some firms have begun to introduce “mental health day” policies, and being part of a team means you have people to talk to when you’re anxious.

These safeguards may not exist for self-employed employees, despite the fact that long hours, a competitive and uncertain market, and solitude pose severe threats to our mental health.

“You’re actually having to do a lot of work… without too much [human] touch,” said Dr. Juli Fraga, a San Francisco-based psychologist and freelance writer. “You’re exchanging emails back and forth, but without the same kind of bond you’d have if you could interact in person.”

Without that support system, freelancers are on their own to determine their own burnout causes. For example, Fraga, who is Asian-American, highlighted that writing on some issues can be emotionally draining, especially for people of color, who are frequently handed stories that draw on prior suffering.

This idea is emphasized in the New York Times piece “Self-Care for Black Journalists,” which was published in the aftermath of the George Floyd protests. For my part, writing about my racial experiences aids in the processing of past trauma. However, if I am not cautious to mix in different assignments, it can create nightmares and episodes of despair.

Other freelancers’ triggers are different. When she has too much on her plate, Leanna Johnson Lee, a Chicago writer who covers mental health and the future of work, says her stress levels rise.

Ruksana Hussain, an L.A.-based magazine writer and features editor, warns that “unexpected health difficulties” may indicate it’s time to take a vacation, a lesson she learned the hard way. Hussain faced “tremendous mental pressure” when attempting to return to work following a catastrophic back injury.

According to Johnson Lee, common danger signs of burnout can include:

Fraga also mentioned that feeling like you “have nothing more to give” can be a warning of impending burnout.

Various methods for taking a break

For freelancers who do not have paid time off, taking a mental health break generally entails smaller chunks of time—a day or two here and there—rather than extended vacations lasting a week or more. Even this, though, can be challenging for some. Setting boundaries at work can help take the edge off and function as a preventative measure against burnout.

“I don’t even know how to take a break,” said Sonia Weiser, the popular publication Sonia’s Opportunities of the Week, based in New York.

However, she admitted that she works to lessen her mental load by automating chores.

Weiser’s weekly summary of pitch calls and writing possibilities has enough paying subscribers to be her primary source of revenue, but it also means she’s constantly in contact with editors and freelancers.

After subscribers began emailing her to share their experiences with specific publications—something Weiser is unable to address—she began encouraging individuals to submit their stories using Google Form. “It’s such a privilege to be able to compartmentalize different conversations [and] emotional labor that you don’t actually have to do,” she said.

Managing mental health as a freelancer may necessitate an adjustment in thinking. Weiser advises freelance writers to quit putting particular magazines on a pedestal, questioning the notion that we must accept “shitty compensation” and terrible treatment in exchange for prestige bylines.

There are also healthy ways for freelancers to create their own support networks. Weiser, who also suffers from anxiety and depression, limits her participation in social media spaces where conversations can quickly devolve into septic.

She has, however, discovered a “small brain trust” of professionals to whom she can turn online. “You find individuals who you can bounce ideas off of, who will give you good advise… who you can bounce drafts off of [and] who will be terrific editors,” she says.

“Being able to compartmentalize emotional labor that you don’t really have to do is such a gift.”

Another mindset shift to consider: let go of the notion that taking a few days off is impossible. There are steps you may do to provide clients with advance notification. You can, for example, post vacation dates in your email signature a week in advance, or even contact clients directly to let them know you’re planning a long weekend.

Pushing through may cost you.

Because time is money for freelancers, even minor interruptions may be costly. However, failing to take time off can have financial consequences.

Hussain, for example, had to take nearly a month off to focus on her health. “The wake-up call came from a regular client who noticed the bad work I was creating,” she explained. “I knew I needed to take a vacation… It needed fully disconnecting to focus on my health, clearing my head, and then recalibrating my work style to ensure this never happened again.”

Unresolved burnout can also have an impact on your productivity. Mindy Koschmann felt a feeling of being stranded as work grew onerous after recently switching from staff writer to freelancer.

“People are coming to you for your creativity, attention, and competence,” she explained. Physical activity has helped Koschmann achieve mental clarity. “I like to run every day—that’s my mental health break.”

“Find ways to recharge each day, even if it’s a smaller break—even if it’s just taking 20 minutes to do something enjoyable.”

People suffering from mental illnesses may need to take short breaks throughout the day. On rough days, Johnson Lee, who suffers from anxiety, depression, and PTSD, employs “emergency protocols,” such as working in shorter spurts between activities she enjoys, such as listening to audiobooks. She also works less hours every day till the cycle is broken.

Johnson Lee advised avoiding pushing through the first signs of fatigue. “There are two kinds of mental health breaks: ones you plan for and ones you don’t,” she explained.

“Those you don’t plan for are essentially forced resets when you’re so overworked and weary that you’re on the verge of entering crisis mode.”

Johnson Lee stated she incorporates “non-client work days” into her calendar on an as-needed basis. She also takes vacations on occasion, such as the next 10-day trip.

Even if you are unable to take a full-fledged vacation, you can discover entertaining methods to recuperate. “This could be exercising, going for a walk, reading, listening to music, or simply watching television.”

“It may be meditation, deep breathing, or yoga,” Fraga suggested. “Find ways to recharge each day, even if it’s just a 20-minute break to do something fun.” Watching inspiring animal programs and knitting are two of my go-to coping techniques.

A mental health break, whether it’s a vacation, therapy, or an evening with family, should help you return to work energized. “Do whatever makes you happy and takes your mind off your work,” Hussain advised. “Ask how each chance improves the overall quality of your life experiences, and then take it from there.”

For a business, effective digital marketing is a must, not just a nice to have. To remain competitive in the market, businesses must strengthen...
Read more

How to Create a Portfolio of Copywriting Work Without Experience

You've always had a knack for persuasion; have you thought about working in the copywriting industry? If you lack professional expertise, this could seem...
Read more

Setting clients expectations up front is essential while working as a freelancer to establish a positive working relationship. Critical misconceptions may arise if boundaries...
Read more

How To Grow Your Freelance Portfolio?

The most difficult challenge for freelancers is constantly expanding their business and attracting new clients. You may be considering how to bring in new...
Read more

Gen Z Are Leading The Side Hustle Economy: These Are The Most In-Demand Gigs

More and more folks are resorting to side occupations to earn extra money as inflation continues to creep up across the U.S., whether or...
Read more

There are many various types of freelancers, and practically all of them require a good set of software. A Freelance Video Editor also need...
Read more

Starting Career as a Freelance Interpreter

If you are fluent in two or more languages and want to help others in your community, you are already on the right track...
Read more