What Independent Freelancers Should Know About Inflation 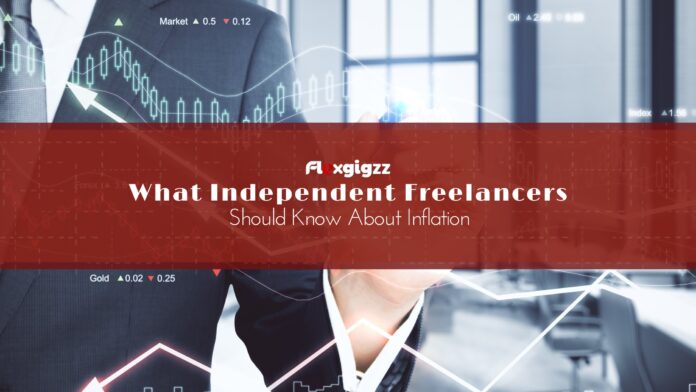 As inflation in the United States rises, a financial blind spot known as the money illusion becomes more prevalent.

Simply said, individuals tend to think in nominal dollars – the amount of money spent or earned — rather than real dollars, which are the purchasing power of your money after inflation is factored in. The money illusion can turn earnings into losses for freelancers and gig workers.

A simple rule of thumb makes understanding the tremendous consequences of inflation over time easier. Take 72 and divide it by the current yearly inflation rate of 4%.

The resulting number informs you how many years it will take to halve your purchasing power. For example, with the present rate of inflation, your current earnings will be worth half as much after 18 years (72/4).

To determine whether you are susceptible to the money illusion, try answering the following question designed by Eldar Shafir, Peter Diamond, and Amos Tversky. The question is as follows:

Adam, Ben, and Carl each received a $200,000 inheritance and purchased a home. They each sold the house a year after purchasing it. Each case has its own set of economic circumstances.

According to the findings, the most popular response is that Carl received the best bargain and Adam got the worst. Carl, after all, received the highest nominal dollar sales price.

These answers, however, are reversed in actual currency. Carl fared the worst, losing 2% of his money to inflation, while Adam fared the best. In fact, Adam was the only one who made a monetary profit. If, like most people, you believe Carl got the best bargain, you should exercise extreme caution when making long-term financial decisions right now.

Let’s look at how the money illusion affects freelancers specifically.

Given rising inflation, it’s critical for freelancers to consider how to boost their earnings to keep up. Consider a therapist who has a large number of long-term clients.

Therapists are frequently unwilling to raise charges on these clients due to status quo bias, or our desire to keep things as they are. Unfortunately, in an era of rising inflation, this can lead to a widening disparity between what they charge clients and the revenue required to maintain their standard of living.

If the therapist feels the sting of increased rates, they should raise their own prices to keep up, even on long-term clients. This will assist them in avoiding a much higher price hike in the future, which may appear unjust to customers.

Of course, inflation is not the only factor influencing freelancer pricing rises. A designer who has recently won a major prize for a campaign she created for Apple should not limit her pricing hikes to the rate of inflation. Rather, she should think about supply and demand in a broader sense.

Consider a roofer who is installing a new roof: If they’d bid on a project in March 2020, the cost of lumber would have been roughly $785 per 1000 board feet.

If the project took many months to complete, those same 1000 feet would cost approximately $1700, or more than twice as much! If the roofer fails to include a condition in his offer to account for material price increases, he may wind up losing money on the contract.

It is critical to protect oneself from rising prices in the event of project delays during periods of high price uncertainty.

Consider an entrepreneur who owns a pop-up restaurant or a cloud kitchen. The owner was prudent enough to obtain insurance, but she failed to increase her coverage in order to keep up with inflation.

As a result, when a pick-up truck driver stumbled on a wet floor and shattered his leg, the medical coverage was no longer enough. It could barely cover half of the hospital fees, requiring the entrepreneur to take out costly loans to cover the remainder.

Given the escalating cost of insurance, company owners should examine their coverage on a yearly basis.

Inflation affects different types of freelancers differently. The roofer faced skyrocketing lumber prices in the summer, which have since dropped, while drivers are facing significantly higher gas prices in the fall and winter.

Given these inequalities, freelancers must assess their own inflation risk. They should investigate pricing patterns for their major expenses, such as lumber, gas, and cleaning supplies. They should then build a strategy for dealing with these higher expenditures based on this individualized approach to inflation.

In the United States, we don’t experience inflation, at least not in our everyday lives, so it’s simple to dismiss. However, if you fail to account for inflation in your business, you will be far more likely to suffer the effects.

Because of their inadequate safety net, freelancers are particularly vulnerable to the money illusion, which is why you should take action to combat inflation before it’s too late.