How Much Should A Freelance Web Developer Earn? 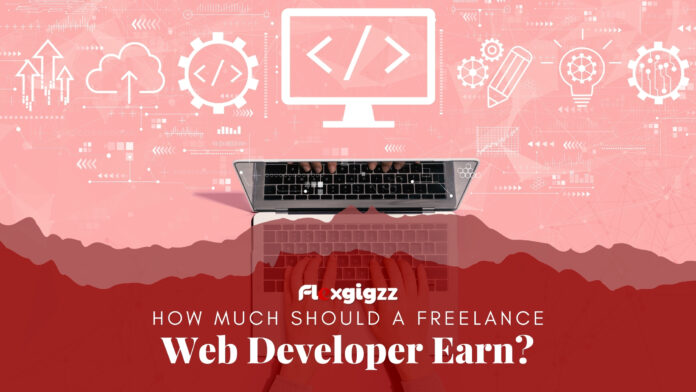 Numerous aspects can influence your actual compensation when it comes to a web developer. If you reside in a tech hub city, your typical pay may be more than if you live in a rural location, for example.

Even if you work from home, your compensation can vary depending on where you live. Your location influences how much you pay in taxes, which directly affects your take-home income. It can also be a deciding factor in your compensation offer since some remote employers scale salaries to the living costs.

On top of that, your income may be affected by whether or not you negotiate if a firm values pay parity or employ salary tiers and other factors.

RATE OF THE LOCAL MARKET

This is because living expenses in New York City are substantially higher, and companies seeking to employ in New York must pay higher wages to account for this, raising the local market rate in the area.

On the other hand, some organizations do not scale compensation depending on geographic location, which can impact how far your salary “goes” in any given place.

When it comes to remote employment, your location might have an impact on both compensation and job options. Some small jobs, for example, only hire in specific time zones. However, some employers just demand you to be able to work some or all of your hours within a particular time zone — regardless of what time it is for you — which can be excellent news for night owls or early risers!

SIZE OF THE COMPANY

You should also consider the size of the organization that is employing. Is it a small startup, a medium-sized business, or a major corporation? While large corporations frequently have more extensive resources than medium or smaller corporations, well-funded startups can also provide higher-than-average salaries as well as stock options.

YEARS OF EXPERIENCE AND SKILLSET

Your skillset, years of experience, and current job title all play a factor in your possible wage offer. An entry-level web developer and a senior software developer residing in the exact location are unlikely to receive the same salary. The more web development talents you have, such as mastery of JavaScript frameworks such as React, the more likely you are to earn a higher offer.

In addition to rugged capabilities, soft skills and managerial experience are vital advantages in pay negotiations, and you should stress these in your interviews and resume.

Companies frequently utilize wage levels based on competence and experience as rules or brackets to which they adhere when making offers. Your typical salary may show where a recruiter or hiring manager believes you fall on the compensation scale at that organization.

Whether or not you bargain can also have a significant impact on your compensation. Salary tiers at some firms might reduce the extent to which negotiation affects your pay bracket. In that situation, “negotiation” may simply entail arguing that your talents and experience place you in a higher tier. In other cases, not bargaining can mean leaving money on the table.

It’s challenging to navigate, especially if you don’t believe you have any negotiating power. It’s one of the reasons why knowing typical pay is so crucial! You’ll know if an offer falls within the normal range and whether you want to start negotiating.

YOUR AREAS OF EXPERIENCE

DISCRIMINATION BASED ON RACE, GENDER, SEXUALITY, AND MORE

Unfortunately, discrimination based on color, gender, sexual orientation, and other factors might affect your compensation as a web developer. Women continue to be underpaid in the computer field when compared to men.

Because many lesbian, gay, bisexual, transgender, queer, and intersex individuals do not always reveal their status at work, it is far more challenging to obtain a precise gauge of wage disparities based on sexuality or gender identities.

Understanding the problem can help you decide what to do next. We believe that being upfront about how discrimination affects salaries will empower you when bargaining — and put more pressure on those in positions of power to pay fairly.

Why is it important to know how much web developers make?

That was a lot of information! But, in the end, why is it essential to be so explicit about how much money web developers make in each location?

Knowing how much you should get paid is vital, especially if the wage offer you’re given isn’t a number you’re comfortable with. If you know how much you deserved, you may feel more empowered to push back or bargain for a wage that is more in line with the average for your area, talents, and experience.

If you’re not sure what the typical income in your region is, websites such as Indeed, PayScale, and Glassdoor all contain pay information that you can search alongside where you reside.

When it comes to wage negotiations, knowing the typical web developer compensation is essential. This is especially true for women, particularly women of color, who have historically been paid less than men and are statistically less likely to negotiate their salary (Dice Insights).

Aside from extending your talent pool and the cost savings that come with having a remote staff, remote work frequently has an even more...
Read more

Why It Matters for Freelance Writers to Secure Their Copyrights?

The ability to pursue your hobbies and ideas is one of the benefits of freelancing. Particularly as you advance as a freelancer, potential clients...
Read more

How Can Technology Companies Survive in a Remote Work Environment?

A growing number of IT companies have embraced remote working in recent years. However, the procedure is not without its own set of problems....
Read more

5 Surprising Truths About Charging — and Getting — What You’re Worth

After years of assisting freelancers of all levels in raising their rates and charging what they are worth, here is what we've discovered about...
Read more

With These Tricks, You Won’t Be a Broke Freelancer Anymore!

Behind the freedom lifestyle of freelancing life, many are broke or have tight budget.  With These Tricks, You Won't Be a Broke Freelancer Anymore,...
Read more

Tips And Tricks For Self-Marketing: How To Promote Yourself As A Freelancer!

Self-promote may be difficult, but it is necessary for success. And it should not be something you do when you have little to no...
Read more

Can Attitude Outperform Talents When it Comes to Freelancing?

Which of the following do you believe is the most significant factor in freelancing success? A) Experience  B) Competence  C) Attitude While they are all crucial, I believe...
Read more

In the Gig Economy, How Do You Find the Best Freelance Developers?

Take advantage of the most significant advancement in the future of work. I used to work as a freelance developer to broaden my skillset and...
Read more

Blockchain offers new ways of conducting business in the gig economy— you must understand its implications. Blockchain is the one technology causing a palpable frenzy...
Read more

9 Skills Freelance Web Designer Needs — and How to Get Them

If you're new to technology, it can be challenging to know where to begin. Numerous pathways are available to you, ranging from web development...
Read more

How to Advance a Successful Freelance Software Development Life Cycle

From the early 1940s until the 1960s, the period of the information system and its development began. Before that, in 1910, Frederick Taylor and...
Read more

7 Ways to Overcome Procrastination for Freelancers

To complete your freelance job on schedule, you must devise and follow a defined plan of action. That's easy to say but far more...
Read more