A lot of people are beginning to think about the future. However, I can assure you right now that there’s nothing to worry about. Computer developer is here to stay, so are their paychecks.

There’s no reason to think about what the future holds for programming. There are more prospects for coders than 10 years ago. If you’re looking to become a programmer right now, you’re not making the wrong decision.

This article will list the top six reasons why it is worth being a software developer in 2021.

Look around you and tell me how many electronics you’ve got. Tell me if there’s any software you need to run? Chances are they’re all doing that.

This means the software developers have worked on almost everything you’re using.

For sure, the world needs excellent programmers.

Software engineers can get a job at almost any technology organization. The top four companies that employ developers are Amazon, IBM, U.S. Bancorp, and JPMorgan Chase. Amazon pays programmers about $122k as a basic salary. They expect their workers to know about Java, C++, and C.

Banks are on the list due to the need for finance app developers. With blockchain now on the rise, learning how to code is more important than ever before.

This is one of the highest paying salaries in software production.

People seem to forget that there are other possibilities out there besides 9-5 working. The software developer has the potential to be self-employed. A lot of programmers end up being successful freelancers.

The best part of freelancing is that you don’t have to get up in the morning to get to work. 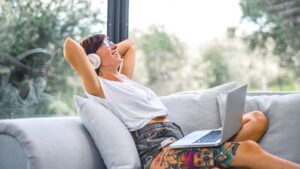 You could fly around and see stuff that would not be possible with a 9-5. You really have the right to live anywhere in the world (as long as you have internet access, of course).

However, most freelance programmers can live in cheaper states with lower taxes and rent. Sure, you’re still going to report to the boss and have deadlines. But it definitely beats having to live expensively like NYC or Los Angeles.

Degrees are getting too expensive, and college graduates are struggling to pay off their loans. The best part of being a programmer is that you don’t need one!

The only things you need are:

Clients don’t care where you went to school. They just want you to do a good job.

Some typical 9-5 jobs would no longer require a degree. Companies like Google, Apple, and even IBM are no longer interested in degrees.

The reality is that most businesses are more interested in skill.

But to get a job with a company like Google without a degree, you’re always going to need some experience.

The only way to get the experience is to be freelance. You can do as I said before and start working free of charge. Then, after creating a portfolio, get some clients.

If you like puzzles and games, the production of software is going to be a blow. The reality is, programming can be enjoyable. Software creation sounds like you’re trying to solve a puzzle in a video game. Or it may even be like trying to solve a complex math puzzle.

There are also a lot of advantages for people who love video games.

If you’re a gamer, programming is going to be 10 times more fun. You can make your own now instead of playing in someone else’s game. But are there long hours and strict deadlines for the gaming industry?

Yeah, but with any work, that’s real.

You can’t imagine a random office gig to be any better than playing a game. You’re going to have to control how it looks, how it sounds and how it plays.

Ok, that sounds like a nice time for me.

Are you someone who thrives in a creative working environment?

That’s good news if you’re planning to become a software developer. Creative people are flourishing in this area like never before. Why do you think that individuals like Bill Gates and Steve Jobs are considered Da Vincis and Michelangelos of our time?

If you’re imaginative and want to show it off, then the trick can be done by your coding skills.

These are the best innovative app developer jobs:

Last but not least, the best benefit of being a software developer in 2021 is capital. Programmers are making more money now than ever before. There is also an anticipation that the profession will develop in the future.

Only take a look at what happened during the pandemic. Software developers generally retained their jobs and had the privilege of working at home.

Entry level developers at Amazon or Google will earn more than $100,000 a year. That kind of money will help you pay off your debts and even buy a home.

Similarly, independent programmers receive an annual starting salary of around $58,000. Freelancer profits can vary depending on the quantity and nature of the client.

Finally, becoming a software developer in 2021 is a smart idea. The data indicates that software engineers are making a lot of money and that there will be demand for jobs in the future.

Remember to be passionate about the job you’re doing. Through the product of their work, developers will find their passion. Treat it like a work of art, and have fun on the way with it.

After that, you shouldn’t have any problems finding a job.

2021 is a perfect time to be a software developer. And it’s probably going to stay that way for several years to come.