If you saw a boomer in a co-working space who doing his business with a laptop, just like other Millenials it will be more common in the coming days because more boomers join freelance jobs .  Boomers account for 35% of the gig economy, according to Dow Jones. Boomers may become bored after retirement and seek part-time, flexible work. Gallup research suggests that people between the ages of 62 and 66, when they are more likely to begin receiving social security, are most likely to work part-time or on a temporary basis.

According to MBO Partners’ study, those who work in the gig economy are generally satisfied. To diversify financial risk, the average independent has four or five clients. And eighty percent of self-employed people say they’re happier.

You may see even more boomers at co-working space or that coffee shop where you still work from time to time in the near future. According to Market Watch, the Department of Labor expects a 75 percent rise in employees 65 and older entering the workforce by 2050. 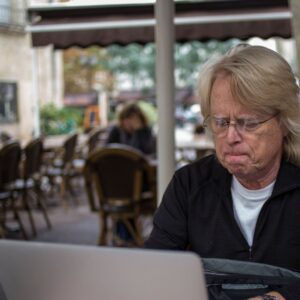 According to the United Nations, global life expectancy has increased to 72.6 years. Many people would have several occupations over the course of their lives. During their working years, baby boomers hold around a dozen workers.

The “side hustle” is still common today, and people over the age of 50 are hustling hard as well. The majority of boomers with side jobs finish more tasks every week than their millennial counterparts.

Why is it that an aging population prefers to work as a freelancer, where on that age supposed to retired and spend days in leisure?

Here are the reason, according to Digital Information World:

Many people want to freelance after working in corporate jobs or having children because it allows them to have more independence and flexibility than they had when they were younger. If they feel need to upgrade their skill nowadays there are some of online courses like on Soho Learning Hub who provides professionals courses program.

In addition, many baby boomers are debating whether or not to retire and are searching for ways to stay engaged. According to the Economist, “the boomers, in their current guise as the young old (yold), will change the world, as they have done countless times before at various points of their lives, by continuing to work and remaining socially engaged.”

With the digital boom where one no longer has to go to the office and can do work at home, freelance remote jobs are a new choice for senior citizens to remain productive. Coupled with the existence of freelance platforms such as Flexgigzz.com that makes it easier to find freelance jobs.