In recent years Python as a programming language has been widely discussed and used by both senior and novice developers. Python is known for its simplicity, quickness, and adaptability. Companies like Google, Spotify, Pinterest, and Instagram use Python to power their software, which is used by millions of people all over the world, from desktop scripts to web applications. If you are a web developer, you must check these 6 Python Packages for Freelance Web Developers.

Django will help you go from almost nothing to a fully featured web application, whether you need a backend for your personal blog or a content management system for your company. As Django getting popular, we put Django  as number one in the list of Python Packages for Freelance Web Developers here.

Furthermore, many implementations for a variety of common web development tasks are available right out of the box.

The second in the list of  6 Python Packages for Freelance Web Developers is Request. It is as Pythonic as you can get. The package’s clean, elegant API has won it thousands of downloads and a spot among the best of the best. Making an HTTP request of any kind is as simple as writing a single line of code with Requests. Receiving and parsing a response is, fortunately, just as easy. 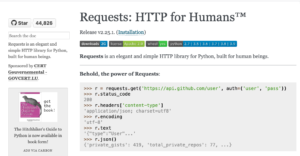 Selenium is a web automation framework with Python bindings for a variety of languages.  It is one of a Python Packages that Freelance Web Developers must try.  A developer may use Selenium to programmatically automate the opening of a webpage, the entry of fields, the clicking of buttons, and the submission of forms. These kinds of scripts are frequently used to join sweepstakes. Be cautious! Before you develop a program like this, make sure you read the terms and conditions.

Pillow is a fork of the commonly used Python Imaging Library, or PIL. Pillow can be used to create composite images, apply filters, change transparency, overlay text, and transform image file types, among other things. Pillow is the way to go if you need to edit your photos.

Matplotlib is a library for plotting mathematical functions and models, as its name suggests. Matplotlib extends Numpy’s power by allowing you to generate plots, bar charts, scatter plots, and a variety of other visual representations with just a few lines of code.

Matplotlib, despite being open source, has the potential to compete with commercial software such as MATLAB and Mathematica.

If you need to parse HTML for specific components, BeautifulSoup4 is the package to use. Regular expressions aren’t always enough to get the job done, and they fail to process HTML documents correctly. BeautifulSoup4, on the other hand, has a number of features that will almost definitely suffice.

Many programmers wonder how they can package their code so that it can run on machines that don’t have Python installed. PyInstaller, thankfully, has a solution. Porting an application to a standalone executable with PyInstaller is as easy as typing a single command in a command prompt or terminal.

For a long time, Pygame has been the de facto standard for Python game development. Handling input events, controlling sprites, and rendering surfaces is a breeze with this game engine. Pygame also has a wide range of multimedia features, such as CD drives, cameras, and audio devices.

Start your career as freelance pythonista on Flexgigzz.com and  scale up your python skill by using optimisation and parallelisation techniques here.