Most Difficult and Easiest Programming Languages to Learn

When you want to learn to code, you must want to have a good experience of it. You want to learn step by step from the easiest one to the advanced one. But what if you wrong in taking programming language?  Instead of creating good memory, you screw up your brain.  Therefore, we list down the most Difficult and easiest Programming Languages to Learn, so you won’t take the wrong language.

Asking a programmer about the easiest language to learn is like asking someone about their favorite ice cream. Everyone has a preference and there is no real right answer. On the other hand, without mastering the popular programming languages, you can’t become a great software engineer. We will take a look and compare the most difficult and easiest programming languages.

C++, an extension of C. C Language  is quite easy to learn and it is a general-purpose programming language. C++ is hard to learn because It has a complex syntax to allow for a wide range of applications. Besides that, it’s a permissive language, which means you can do whatever is theoretically feasible, even though it’s not logically correct. And lastly It is better taught by someone who has a solid understanding of C programming.

Google Chromium browser, several Microsoft applications, and even financial modelling at Morgan Stanley are said to be done with C++.

Prolog is one of the first logic programming languages, and it is now being used in artificial intelligence and natural language processing applications.  It is hard to learn because, it’s a unique language with data structures that aren’t found in other programming languages. It necessitates an unreasonably capable compiler. It also forces the programmer to consider their reasoning carefully from the start.

After FORTRAN, it is the second-oldest programming language, and it is still used in higher-level systems and artificial intelligence. LISP is hard to learn because It’s a disjointed language of solutions tailored to particular domains and Parentheses are often used in LISP syntax, which can be difficult to get used to.

Haskell is a lambda calculus-based polymorphically statically typed, strictly functional language. It is mainly used in analysis, industrial applications, and teaching, and is named after mathematician Haskell B Curry. Haskell is hard to learn because, it follows a 100% functional paradigm, unlike most modern languages which accept imperative commands. It’s difficult to understand the nuances of compilation and error fixing in Haskell. Besides that  It involves intense use of jargon, which might put off beginners

Malbolge is an example of “esolang” and is named after the eighth circle of Hell in Dante’s Inferno (esoteric programming language). The first Malbolge software took two years to complete. INTERCAL and Cow are two other languages in this group that you might try as a challenge. It is hard to learn because, It uses an obscure notation.  Not many programmers spend time learning it, hence fewer learning resources.  Mabolge is a self-modifying language that results in erratic behaviour.

The Hypertext Markup Language (HTML) is the language that most web pages are written in. Tags and elements are used to control how text, photographs, and interactive forms are presented. Cascading Style Sheets (CSS) and JavaScript are often used in conjunction with HTML to define sophisticated types. It is an ideal language for new coders due to its ease of use. It is easy to learn because it has a simple structure with human-readable opening and closing tags. You can use a WYSIWYG editor and watch the code change in the split view

Using libraries like React and jQuery and frameworks like Angular, you can solve the web’s most complex problems. With Node.js, you also have server-side code covered.

Since it is designed for non-programmers and is beginner-friendly, Javascript is simple to learn. It’s a great way to get started with programming. Since Javascript is so widely used, it is the default environment in most browsers. The JavaScript community is huge and supportive of newcomers. 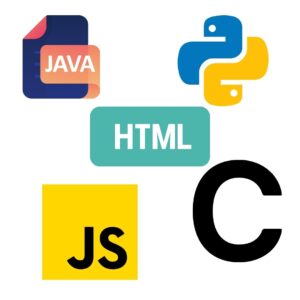 C is a general-purpose programming language that most programmers master before progressing to more advanced languages. Several of the most widely used programs today are written in C, from Unix and Windows to Tic Tac Toe and Photoshop.

It is easy to learn because Python often using English language words. Python has several libraries for various applications and also supported by a huge community of programmers, who likely have the answer for all your questions.

Java is a general-purpose programming language that is built on classes and is object-oriented. It’s designed to work in a variety of environments—write once, run anywhere (WORA). It’s one of the most widely used languages by back-end developers and security software. Java is easy to learn because it is an intuitive syntax that’s concise and beginner-friendly. If you have prior experience with object-oriented programming, it is even easier

After checking list of  the most difficult and easiest programming languages you might think what’s the best programming to start learning?. Then you must know the purpose of it.  You want to build a career in software development, web development, mobile app development, or even game development, HTML is a good place to start. For big data and data science, Python might be your best. You can learn programming online on Soho Learning Hub. There are Python, web development, UI/ UX, Haskell and even cyber security courses.  Once you master the programming skill you can start freelancing on Flexgigzz.com