More Freelance Jobs in the Pandemic and The Trend will Continue

There’s a saying going around these days: The future of work is now — put into overdrive by the pandemic that suddenly transformed millions into virtual workers. But the coronavirus has also accelerated a major shift to freelancing that’s severing ties between companies and employees.

Two million Americans have started freelancing in the past 12 months, according to a new study from Upwork, a freelance job platform. And that has increased the proportion of the workforce that performs freelance work to 36%.

During the booming job market before the pandemic, many workers chose freelance or contract jobs because they preferred the flexibility and variety it offered. 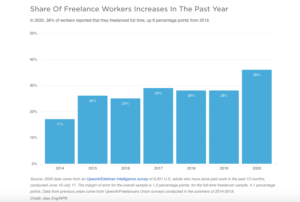 But now there’s evidence that many workers are turning to freelancing out of necessity, not by choice. Employers have shed millions of permanent, full-time jobs. Freelancing, with all its insecurity such as no benefits and unpredictable income, has often become a means to survival.

Diana Gill had been an editor at major New York publishing houses for 24 years. But in April, as she was having early morning coffee, three chat requests and an email came in from the top brass. Could she get on a call with the president of the company?

“Of course, I knew what that meant,” she says. She was being laid off from her job as an executive editor at Tor Books. Gill was given a month’s notice with plenty of work left on her plate. So her new reality didn’t register at first. “So it was like go, go, go and then it was May, and I was like, hmm, well there’s COVID so there’s certainly not jobs right this minute.”

That’s when it sank in: She was a freelancer. The security of so many years of having deep ties to an organization was gone. Now, editing book manuscripts is a specialized skill, and Gill has contacts in the field so she’s been pretty busy so far. But she understands how quickly that could change — that income and gigs are often completely unpredictable as a freelancer.

“Freelancing is feast or famine. So it kind of comes in waves. And I know at some point there will be less of it. So I’m looking at what to do and how to make it work as a business,” she says.

Making it work as a business, becoming a free agent, that’s the challenge, the predicament, however you want to phrase it, facing many Americans. They’ve been thrown out of full-time, permanent work into the much less secure world of freelancing.

Julia Pollak, a labor economist with the job site ZipRecruiter, says there has been a dramatic shift in job postings on the site from permanent to temporary. “The percentage increases are alarmingly big,” she says.

Almost immediately when the pandemic hit, the percentage of postings that were temporary jumped from 24% to 34%. And, despite the recovery in the job market, the share of temporary jobs has remained elevated, Pollak says.

Part of this shift is predictable. When the economy is shaky and the outlook uncertain, employers are reluctant to hire permanent workers. But there is something else happening as well.

Tools such as Zoom that have flourished during the pandemic create more flexibility in the workplace. White-collar jobs can be done anytime, anyplace, by any capable person with a phone and a laptop. Such jobs are untethered from the office, so workers don’t build personal connections with their bosses.

“I think now these companies are starting to see, ‘Hey, having these folks at home is saving me money. Hey, I don’t see those people, so do I really need to be giving them benefits?’ ”

At the start of the pandemic, the massive job losses were centered in tourism, travel and restaurants. But as the months dragged on, the ax fell on a wide range of white-collar workers. And some workplace experts say many permanent white-collar jobs will now be done by contractors — probably forever.

Starting a freelance career after getting laid off isn’t something people do by choice, Caudle says. “You almost begin to freelance by necessity. You don’t have time to cry or be down or depressed because you lost your job. You still have bills to pay. And those bills don’t care that you lost your job.”

Futurists have long predicted that America would become a free-agent nation, where workers offer their services independently, branding themselves to land gigs and deals as full-time permanent employment withers away. That did happen in parts of the economy, but not at the hyper-speed predicted by the futurists.

But now the coronavirus is upping the pace, says Lara Vandenberg, founder of Publicist, an online marketplace for marketing and communications work. “We’ve just seen this trend completely accelerated. What we thought was going to happen in three years happened in three months,” Vandenberg says.

The freelance economy was enormous before the pandemic, and it’s growing larger during it. Upwork says it now contributes $1.2 trillion to the U.S. economy — 22% more than in 2019. And the Upwork study claims that 60% of post-COVID-19 freelancers say no amount of money would convince them to take a traditional job.

Four ways to develop soft skills as a freelancer